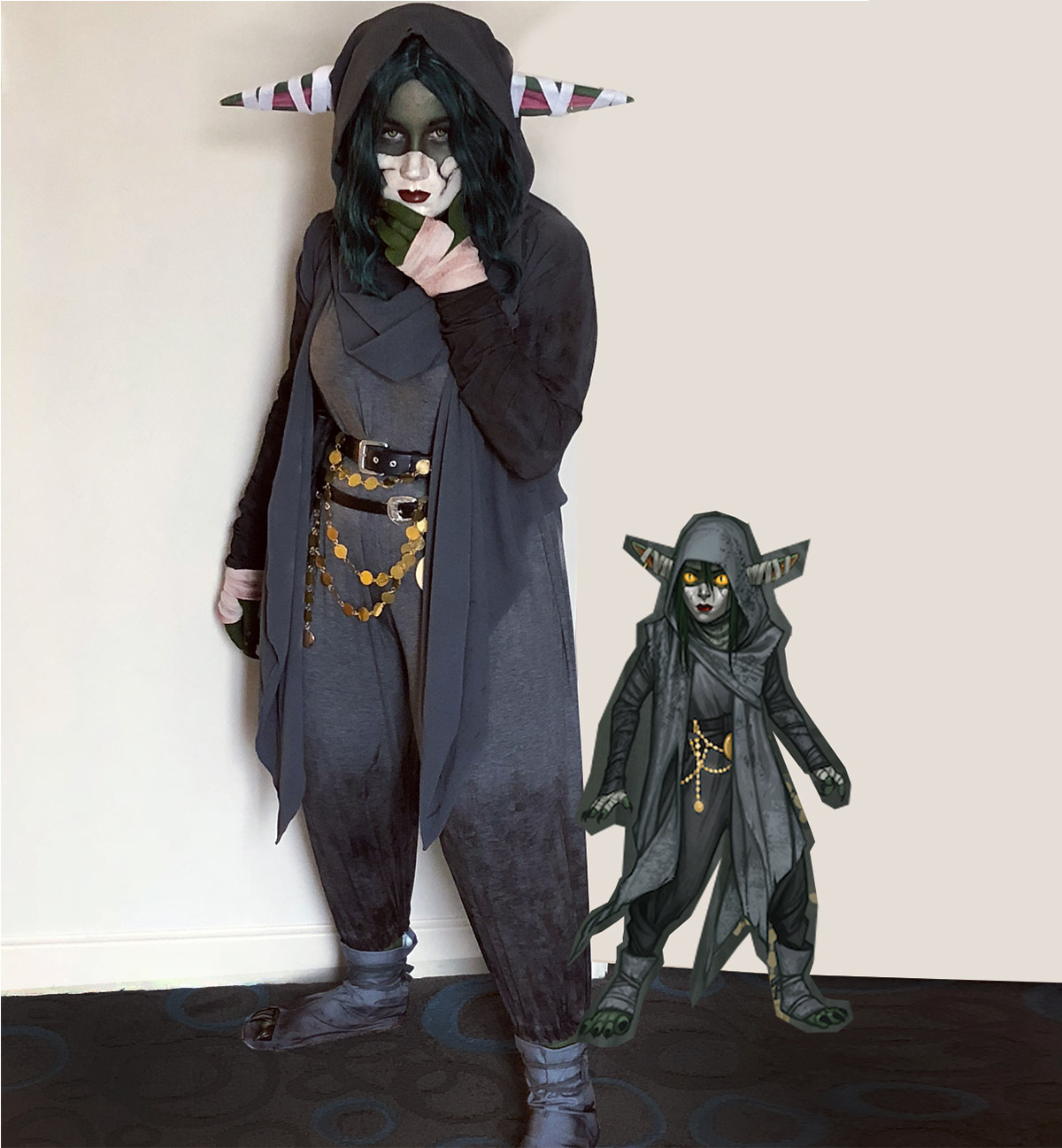 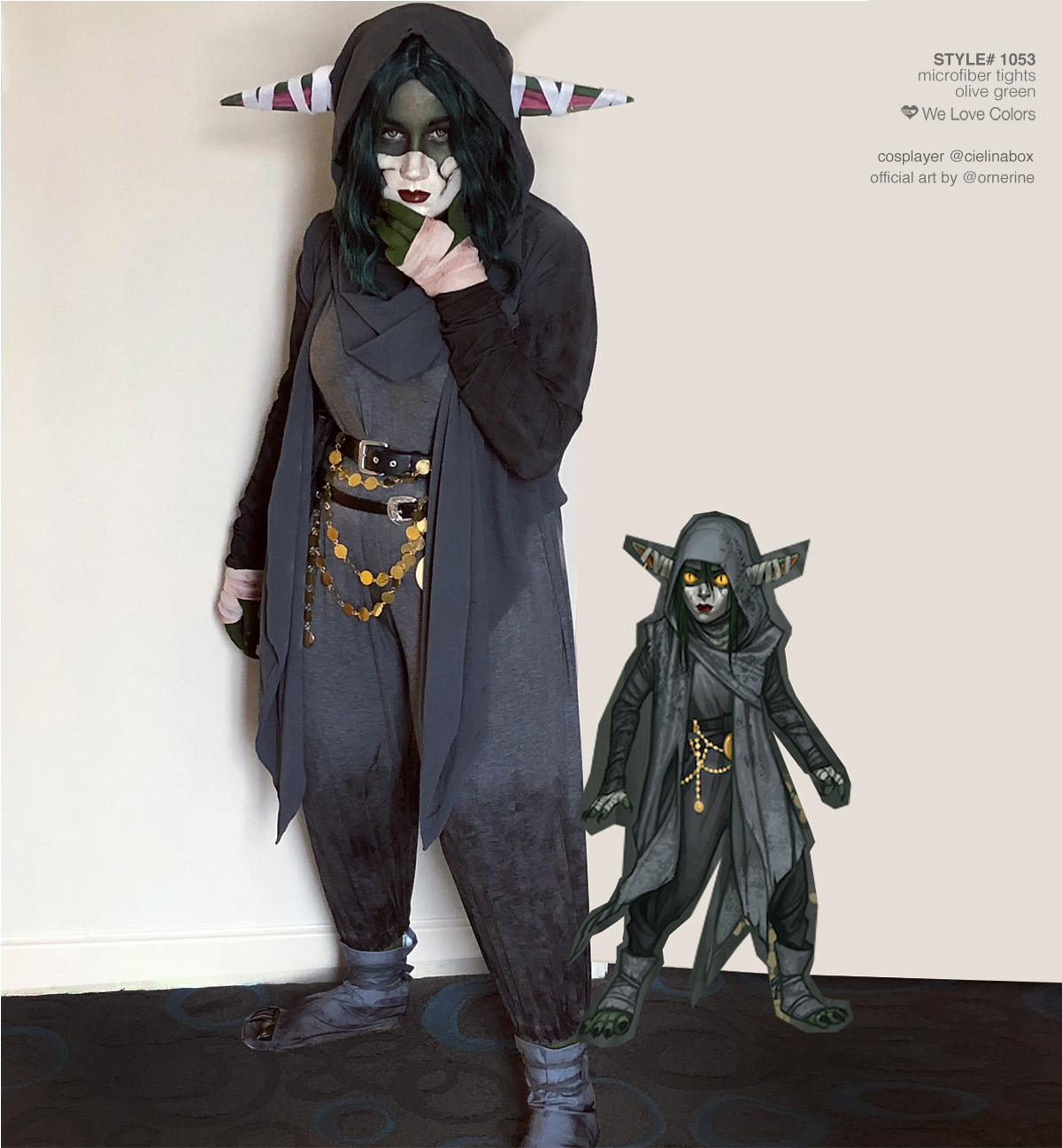 Samantha submitted a cosplay tutorial for their Nott the Brave from Critical Role that shows off how to make everything, from armsocks in the right green skin tone to creating Nott’s porcelain mask (hint, it’s not actual porcelain, but something super easy to work with)!

The first thing I did was the mask because I felt like that was a very important part of the character. I bought a plain white masquerade mask from Michaels, cut it in half jaggedly like broken porcelain, then painted it with acrylic paint and pastels to give it a grimy look.

The jumpsuit was made using a Simplicity pattern, I altered it to have a different back, a waist that didn’t tie, and elastic on the ankles. This was made from a heather jersey fabric that’s really light and I love the way it drapes.

Nott’s draped cloak and sleeves were made from scratch based on a cardigan I own. The back of it was made much shorter so that the long parts in the front sort of hung like a scarf and I elongated the sleeves so that I could pull them up when I wear it to give it more texture since the fabric sort of bunched up on my arms. I connected a piece of the same fabric I used for the jacket to drape across my chest that velcros to the shoulder on the opposite side. It’s hidden by the hood, which is a separate piece. It’s basically a tube that goes over my head with two holes for the ears. I believe Nott’s hood is one big piece of fabric that wraps around her head, but I think this is so much easier to put on and I like the effect it gives of gathering around my neck.

The ears were some bad looking foam elf ears from Amazon. I took them off of their original tiny headband, painted them, added felt for the bandages, and glued them onto a wider headband for added stability. It just goes on top of my wig and is hidden by the hood.

The wig was a simple curly green one from Amazon. I combed it out so the curls weren’t so uniform but that was it for styling. It’s not the type of wig Nott cosplayers normally use, but I love the natural texture and interest it adds to the cosplay.

The shoes were made using cheap Target flip flops and upholstery fabric I found in the Joann remnants bin. I followed a tutorial on how to make Naruto sandals and patterned them myself, painting the flip flops to match and contact cementing the fabric on. Nott basically wears a piece of fabric tied around her feet, but I didn’t want to have a more solid shoe while walking around the convention and eventually an outdoor renaissance faire. This was my first time ever making a pair of shoes, and they’re honestly one of my favorite parts with the cosplay.

The belts I already owned from other cosplay. I added two pouches which are hidden under my coat piece but allow me to easily access my flask and trinket collection. (Yes, I went that far. I ended up never using either of them, but I love tiny details like that.) The chain was found in the Joann trim by the yard section and just draped in the belts while I prayed it stayed, and that method worked for once.

Now for the part you’ve all been waiting for, the armsocks. They’re made from We Love Colors tights in olive green. My armsocks aren’t truly armsocks, they’re more like elbow gloves. This was because I had to start over three times to get them correct. It was my first ever time making them, and I really struggled, but I eventually found my way by combining multiple tutorials and tips from my friends and I’m super proud of them. Since it was too short after my attempts to put it on over my neck, I cut the legs of the tights short, leaving the part that goes on your hips normally part as extra material. That turned out to be a blessing in disguise because I was able to use that extra fabric for socks, since Nott’s feet stick out of her shoes. Both the armsocks and actual socks got claws made of InstaMorph (a moldable plastic) and painted with acrylic paint. Even though I struggled, I love the illusion they give off and it’s super fun to move my fingers around with big claws! The illusion of having her clawed toes really gave it a nice touch too and I got a lot of compliments on them. 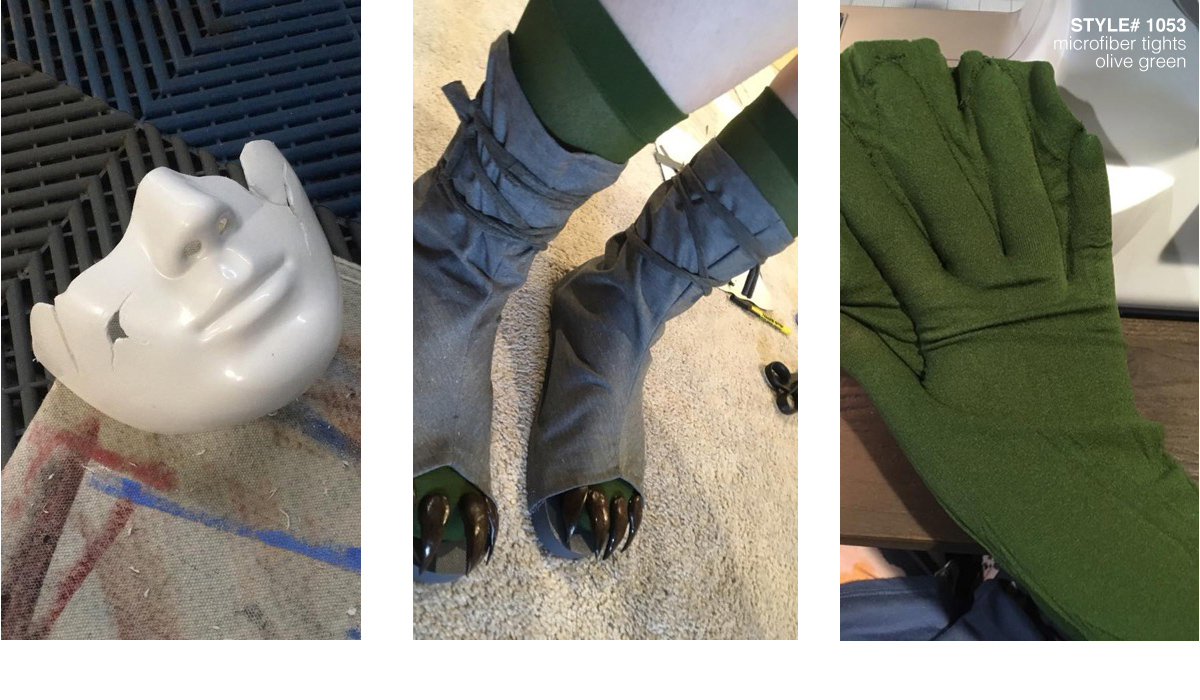 I attempted to make a color match with the makeup in Mehron Paradise dark green, but it’s a lot bluer than the tights and didn’t match too well. I ended up buying a red facepaint to tone the blue down as well as adding yellow and brown for contour and highlight. I finally used Eclipse FX contact lenses from HoneyColor for her piercing yellow eyes.

To weather the cosplay I used different shades of brown, black, and red on the shoes, bandages, and clothing. The jumpsuit got dirt going up the legs and fading around the knees, and the sleeves got it fading just before the shoulder seam. In the end it was so worth staying up so late because it just gives that much more character to the costume and looks great in photos!

Samantha (More about Samantha on Instagram @cielinabox )
Shop the We Love Colors’ Styles Featured on this tutorial:
Style# 1053 Microfiber Tights

If you have used We Love Colors for cosplay or any other creative projects feel free to email us at social@welovecolors.com.
Edited by Katherine Ceballos for We Love Colors.

Inside Cosplay: Crocheting Costumes by Rita and Mariko